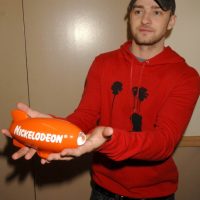 SANTA MONICA, Calif., March 29, 2011 /PRNewswire/ — In recognition of his work as a philanthropist and environmentalist, Nickelodeon will honor actor and musician Justin Timberlake by presenting him with The Big Help Award during Nickelodeon’s 2011 Kids’ Choice Awards on Saturday, April 2, at 8:00 p.m. (ET/Tape delayed for West Coast). Timberlake will be honored during the star-studded telecast, hosted by Jack Black at USC’s Galen Center in Los Angeles. The Big Help Award recognizes individuals who take actions to better the world and whose significant impact on their community has inspired kids to do the same.

Timberlake’s ongoing charitable work led him to a partnership with Shriners Hospitals for Children®, a health care system consisting of 22 Hospitals dedicated to improving the lives of children by providing pediatric specialty care, innovative research and outstanding teaching programs for medical professionals. He has been a dedicated supporter of the organization since 2008 and hosts the annual Justin Timberlake Shriners Hospitals for Children Open, a PGA TOUR golf tournament featuring a week-long series of events that raises money for their gracious programs and services benefitting children in need.

Justin’s commitment to the environment can be seen at his Mirimichi Golf Course in Millington, TN. Mirimichi is the first golf course in North, South or Central America to receive Golf Environment Organization (GEO) certified status. It is the also the first in the United States to be designated as a Certified Audubon International Classic Sanctuary, making it the only course in the world holding both designations. At Mirimichi, ecologically responsible methods are utilized throughout to enhance water quality and wildlife habitat as well as reduce water and energy consumption.

«Justin’s ability to seamlessly incorporate helping into his life embodies the true spirit of the Big Help», said Marva Smalls, Executive Vice President, Public Affairs and Chief of Staff, Nickelodeon/MTVN Kids and Family Group. «In true Big Help fashion, he combined his passion for helping kids with his love of golf and through his annual golf open benefit for Shriners Hospitals for Children, came up with a way for people to have fun while helping kids get medical care».

«I was inspired at a young age by my parents and family to do everything possible to give back to the world around us», said Timberlake. «And it has become a mission of mine to help kids of all ages understand the importance of getting involved in their communities and local charities and doing their part to preserve the planet. I couldn’t be more thankful to Nickelodeon for their recognition».

Nickelodeon’s The Big Help is a social and environmental initiative that empowers kids to take positive actions on issues that are important to them. The goal of the campaign is to launch a kid-led movement, focusing on four key issues — health and wellness, education, community service, and the environment. This is the third consecutive year The Big Help Award has been given to someone who embodies the spirit of the Nickelodeon Big Help initiative. Previous recipients include the First Lady Michelle Obama in 2010 and Leonardo DiCaprio in 2009.

Kids can pledge to make a difference in their community by going to www.nick.com/thebighelp. The Big Help site will show them how to take positive actions that will change their world.

No stranger to Nickelodeon’s Kids’ Choice Awards, Timberlake hosted the show in 2007 and has been the recipient of two blimp awards, for Favorite Male Singer award (2007) and Favorite Group (1999). He is also a two time Burp Award champion, having garnered the title in 2003 and 2006. Timberlake’s association with Shriners Hospitals for Children was recognized when he participated in the 2009 TeenNick HALO Awards as one of the celebrities paired with an extraordinary teen who shared his passion for community service and giving back.

Justin Timberlake is one of the world’s most recognized and accomplished entertainers. Originally rising to fame as a member of the phenomenally successful Pop Group, *NSYNC, Timberlake went on to launch a solo career as a singer, songwriter, producer and actor that has earned him six Grammy Awards, two Emmy Awards and dozens of accolades from across the globe.

shhhhh! rt @ThomasCrownVA I HAVE NEW JUSTIN TIMBERLAKE NEWS BUT I CANNOT RELEASE THE INFORMATION UNTIL MY MASTER @TIMBALAND007 TELLS ME TO