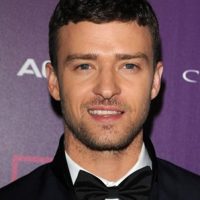 What cologne would your character from «Dick in a Box» wear?
«That guy’s trying way too hard. That guy wears way too much cologne».

Were you involved with the creation of Play?
«I didn’t go in and, like, mix things. But I told them I wanted something citrusy and fresh. I like that out-of-the-shower smell».

How long does it take you to get ready?
«Not too long. A half-hour, tops».

What about your hair?
«My secret for my hair is that I don’t wash it. I shampoo it once every ten days or so. It’s more manageable with the natural oil».

Curly hair is hard, right?
«It’s very hard. They don’t make shampoo for curly hair. They say they do, but they don’t».

How do you get that perfect stubble?
«I just use a trimmer. If I keep it at a certain length, I get fewer complaints about how it feels against the cheek».

What scents do you like on women?
«I’m the quintessential male. They did a study on what men really like to smell on women, and they responded to things like pumpkin pie and vanilla way more than a bouquet of flowers».

JUSTIN TIMBERLAKE DIDN’T ALWAYS HAVE HIS ACT TOGETHER. HERE’S HOW HE DISCOVERED HIS OWN SENSE OF STYLE—AND LEARNED TO LOVE THE DETAILS

If you’re amused by the oversized suits and gold-rimmed shades Justin Timberlake wears in those Saturday Night Live videos with Andy Samberg, you should check out a few old *NSYNC videos on YouTube.

«Most guys in high school wore clothes seen only by their classmates. I wore clothes seen by the world», Timberlake says with a laugh. The gelled, bleached-blond curls and coordinated stage costumes are immortalized on the pages of Us Weekly and Star magazine. «They’re documented—and they look absolutely ridiculous».

He can laugh now. Since then: two multi-platinum solo albums, movie roles, a denim label, and a bombshell girlfriend—Jessica Biel. Timberlake’s wardrobe has evolved as well.

«I don’t think men figure out what they’re really about until they’re 25», says the Memphis native, now 28, appearing relaxed in bleach-splashed black jeans and a fitted navy blazer. «That’s when they start to feel like themselves».

Once Timberlake started trusting his style sense, he could try a three-piece suit with sneakers onstage. It worked. «You sit back and take stock, you stop running in different directions, and you let things come to you», he says. «You can wear clothing rather than having it wear you».

Timberlake looked to icons for inspiration: Johnny Cash, early Elvis, Sinatra, Dean Martin. «It was more about a certain swagger than the actual clothing», he says. His stepfather, Paul Harless, taught him respect for the ritual of dressing. Harless would lay out his suit before bed, matching loafers to belt, choosing socks that went with his tie. «It wasn’t always about color coordination—it was what he envisioned to be the full picture», says Timberlake.

Timberlake rarely wore a scent until French fragrance house Parfums Givenchy tapped him as the face of its new men’s brand, Play. He says he insisted: «You have to make something I’d actually be interested in wearing».

With his input, they developed two versions: one fresh and citrusy, the other warmer, more intense and woodsy. They can be worn separately, or layered. The process helped him appreciate the role of a cologne in his «full picture».

«The right scent can make you feel a little more stylish», he says. «But it should never eclipse who you are. It should complement who you are».

Make «you» shine through

Timberlake finds that he receives more compliments when he adds an unexpected item, like a favorite hat, dog-tag chains, or beat-up black military boots. «The more ‘made-over’ you are, the more ridiculous you start to look», he says. «You become distanced from who you are because it looks so contrived».

Start at the bottom
Timberlake inherited his stepdad’s attention to detail. «I used to keep my Air Jordans icy white», he recalls. «I had one toothbrush for my teeth—and a couple of toothbrushes for my shoes». Don’t underestimate the power of well-tended accessories. Keep a tin of neutral shoe polish or mink oil in your desk drawer so you can buff up your kicks before meetings or dinners.

Tailor your look
Timberlake’s stepfather had his clothes tailored to suit his short stature—and to reflect his attitude. «He had his pants hemmed slightly longer in the front», Timberlake recalls. «They kind of fell in toward his heels and it looked really cool when he walked». Shorter men should make sure their trousers are tailored to break right above the shoes. This creates a smooth, elongated line.

Spritz lightly
When you’re choosing a fragrance, Timberlake suggests just a spray or two of «something that brings out your own scent—you shouldn’t just smell like a product». He prefers lighter, citrus scents, but fair complexions like his tend to be drier, and dry skin doesn’t retain subtle aromas as long as other skin types do. The scent he developed with Givenchy, Play, balances a citrus scent with powerful notes of amyris wood and patchouli, so fading is minimal.

Don’t date yourself
The clothes used in the Samberg-Timberlake digital shorts are half the fun. «You can look at those outfits and pinpoint the exact chronology of the pieces because those were the things that were popular», he says. Go ahead and embrace trends, but mix in at least one classic element—straight-leg jeans, say, or a solid oxford-cloth shirt—to avoid a laughable stereotype.