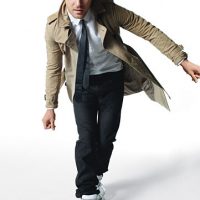 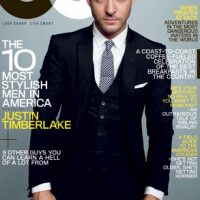 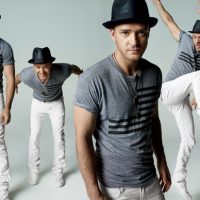 The man who helped bring fedoras—and sweater vests, and beards, and three-piece suits, and skinny ties—back

But at least Timberlake—with 16 million solo albums sold and Jessica Biel to his credit—isn’t one to rub your half-awake face in it. In fact, he couldn’t be more laid-back this morning. No entourage, no assistant, no wraparound shades. Just he and Nick the caddie (who is rocking a pair of wraparounds, as well as a mustache and a mess of shaggy hair; he looks like a spot-on extra from Almost Famous).

Ostensibly, we’re here to talk about fashion and design and all those other subjects that have catapulted Timberlake to the front of our Most Stylish Men in America issue. Which is all well and good with him. But for a guy with so much filtering through his career mixing board, he’s hardly in a rush. «Dude, we can do the interview now, while we’re playing, or we can do it later. We can grab some lunch. Whatever you want. Let’s just play some golf, man.»

So we do play. And Nick and I watch as Timberlake hits every fairway but one on the front nine, for a 42 at the turn. He tightens up his short game on the back, firing at pins, zipping balls backward on the greens like the pros do, and (finally) draining a few key putts, for seven straight pars and a final score of 80.

All the while, there’s chatter about fedoras and three-piece suits and his clothing line William Rast—and why we included Timberlake on our list in the first place: not because of some effortless way he dresses or comports himself but because of the way he works at his style. Timberlake has a knack for targeting trends just before they crest. He might not spark them, but he’s the guy who broadcasts them—whom we point to for making, say, hats popular again, or for making suits look like they were meant to be worn with sneakers, or for wearing a beard that’s not quite a beard per se but is pretty much what every guy at the club wears these days.

His impact is undeniable, as is his willingness to take risks. He’s the guy who rocks the sweater vest off the course («definitely—but not argyle; a solid-color one, usually with a T-shirt underneath»); the tie with a leather jacket («but a really good leather jacket—really sleek and clean looking»).

On the seventh fairway, while he reaches for a 7-iron, I ask if his girlfriend ever gives him a thumbs-up or -down on his outfits before he leaves the house. Timberlake shoots an «Are you kidding me?» look and then answers a definitive no. At which point Nick the caddie jumps in: «Dude, he’s the fucking King of Pop! He can wear whatever he wants to wear. If he wants to rock sandals with socks, a week later everyone in L.A. is going to be wearing sandals with socks!»

Well, we hope not, but point taken. Timberlake is like an athlete entering his prime—firing on all cylinders, nailing everything. Sure, he has made his mistakes (acid-wash denim suit, white-boy Jheri curls, razor-beard-goatee unit), but those days are behind him. He’s the guy we end up dressing like a year after he’s adopted the look. And that’s why he’s kicking off our list—and why we’re here to glean from him the kinds of style tips, secrets, and rules that we non-Grammy-award-winning, mere mortal 14-handicappers can learn from.


If you want to know where Timberlake gets his style DNA, you don’t have to look far. His stepfather, Paul Harless, a recently retired banker, set the mold.

«Nobody dressed like my dad,» Timberlake says. «When he worked at the bank, he looked like Richard Gere in Gigolo. And he would do it all the night before, laying out the suit he’d wear the next day. Even on weekends, if he had to go into the office, he’d wear a trouser pant with a V-neck sweater and tie. And I was like, I want to dress like that! He was just so cool.»

«When he’d get his pants hemmed, he’d ask for them to be slightly longer in the front, because he wanted them to bow. So when he walked, he had this Travolta thing going, where the pants would ﬂop a little bit. And it was cool, man! Some days my mom would come get me out of school a little early, and we’d go meet my dad for lunch. And I remember him walking out of the bank, and with his pants it was like he was gliding down the sidewalk.»

«You want something to eat or drink? Want to hit some balls before we head out? You wanna go off the first tee or the tenth?»

Play golf with Timberlake and what you notice more than his threads or his golf-school-honed backswing are his manners. He is unfailingly polite and courteous. Not in an obsequious way but in a matter-of-fact, this-kid-was-raised-right sort of way.

«The values my mother taught me were like, If you’re going to do something, don’t half-ass it. I remember her literally saying that to me. Like the first time I ever heard the term half-ass was coming from my mother’s lips. I was probably 8 or 9. If you’re going to do something, go ahead and throw 115 percent at it, and if you get 100 percent back, well, there you go—you’re perfect.»

Whether he likes it or not, Timberlake is the guy we think of when we consider the resurgent popularity of old-school hats, like fedoras, trilbies, and porkpies. He realizes this is not always such a good thing.

«I do like hats. But I specifically tossed out some fedoras recently. Like this charity event I went to last night, there was this dude who was so particularly wearing his hat back with some hair sticking out in the front, like he was trying to be in the Brat Pack. He looked like Rob Lowe. I was like, Why? How much time did you take on that? It looked like everything in his outfit revolved around that hat».

«The thing is, you don’t put your underwear and socks on, then a hat, and then get dressed. And subconsciously, people do that. They’re like, ‘I’m gonna fucking wear this hat today! I just bought it, and I’m gonna rock this hat to the bar tonight! And I can’t wear this leather jacket with the hat, because it doesn’t look right, so I’ve got to wear this peacoat.…’ It’s like, Dude, if it takes that much thought, start over.»

4.
When There’s Work to Do, Make Sure You’re Looking Good

Watch Timberlake’s videos and you understand there’s a point to how he dresses. He’s a showman, in the most traditional sense of the word: He sings, he dances, he glides, he grooves. He’s a physical4 dresser, like Gene Kelly or Sammy Davis. In the video for «SexyBack,» he’s tricked out in a black Dior suit, ruler-thin tie, and trim collar. But for the dance scene, it’s a vest, Jesse James bandanna around the neck, and loose pants slung low on the hips. Clothes he can move in. Same as those three-piece suits he wore on tour, designed for him by Stefano Pilati of Yves Saint Laurent. The pants have a kick, a looseness to them. They’re easy. Just like the shoes he wore onstage.

«Some guy came up to me and said, ‘You single-handedly made it cool to wear sneakers with a suit!’ I mean, I just put sneakers on because I couldn’t dance in the shoes I had. I couldn’t leap with just insoles and dress shoes. I would’ve hurt myself.»

5.
Know When to Take It Off

«I find that every year, I tend to look at my clothes and think, I just want to go more and more simple. Who was it who said—was it Lagerfeld?—before leaving the house, put everything on you want to, then take one thing off?»

6.
If You’re Going to Do Something, Do It Right

When I first heard that Timberlake was launching William Rast, I rolled my eyes and thought, Of course, what musician doesn’t have a clothing line these days?

«I knew that response was inevitable,» Timberlake tells me, «but my buddy and I wanted to do it so bad, we were just like—screw it.»

Timberlake eventually approached Johan Lindeberg, who launched the fashion-and-golf label J.Lindeberg, to take the design reins. Lindeberg, however, was skeptical.

«Obviously, I wanted to meet Justin,» Lindeberg says. «He’s one of the few stars out there who understand tailoring and golf. But to work on a celebrity clothing brand, I wasn’t so keen. I wanted to know that he had the passion and strength to make it work.»

Timberlake was determined to convince him he was in it for real and set a meeting with Lindeberg. Three hours later, Lindeberg signed on and now, with his wife, Marcella, is overseeing a mix of skinny jeans, vests, white tux jackets, graphic T-shirts—the kind of clothes Timberlake himself would wear. Modern Americana is the phrase that Timberlake and Lindeberg like to bandy about.

«Johan and I are like family now,» Timberlake says. «I always send him stuff—you know: ‘Hey, watch this movie.’ ‘Hey, listen to this song.’ We never say, ‘Hey, look at that shirt! We need to make something like that shirt!’ It’s about creating a lifestyle.»

And if all goes as planned, according to the two of them, a lifestyle that extends beyond Timberlake’s last name.

«Who’s a style icon? Kate Moss. She looks good in anything. She would look good in one of your T-shirts, in her T-shirt, in a man’s suit, in a huge gown. She looks amazing naked. She even makes nude look stylish. That, to me, is a style icon. She could put a barrel on and it would be some sort of statement.»

8.
And Finally, Back to Hats

A few days after golfing with Timberlake, I watched a clip of him at the charity event he attended the previous night (the one with the guy in the Rob Lowe fedora). On the course, Timberlake had recited, label for label, what he had thrown on before walking out the door that night—slim gray Dolce & Gabbana tux pants, a black William Rast V-neck T-shirt with a dog-tag necklace, and a pair of studded Martin Margiela dress shoes with pink-and-blue argyle socks: «Your sock game has gotta be right if you’re gonna wear dress shoes,» he explained. My first thought was: What the hell was he thinking? And then, when I saw the images, it all added up. He wore the tux pants loose and easy, instead of stiff and formal. The T-shirt hung untucked, hitting exactly at his belt line. Even the dog tag looked right. And, I guess, why shouldn’t it have? The guy is the King of Pop—he can wear whatever the hell he wants.