The Man Of The Woods Tour, Uncasville +14 imágenes 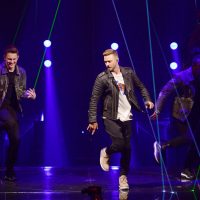 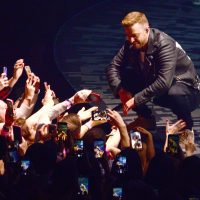 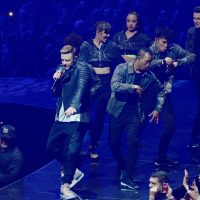 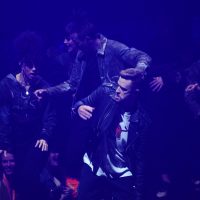 The Bristol Observer — There was a dose of nostalgia in the air as Justin Timberlake settled into the first of two nights at the Mohegan Sun Arena on April 12.

Although Timberlake’s Man of the Woods Tour is named after his most recent album, many in the audience at the sold-out show clearly were looking back at the Timberlake they remembered. I saw a few women wearing N’Sync (Timberlake’s old band 20-plus years ago) t-shirts.

Many in the audience were the right age to have fallen for Timberlake’s music in his boy band days or his early solo work, such as 2006’s breakthrough «FutureSex/ Love Sounds, which gave the world «SexyBack» (and subsequently launched a gazillion newspaper headlines).

Although many in the audience seemed to be drawn to the Friday night show because of Timberlake’s past, nostalgia wasn’t on the artist’s mind.

It was telling that the most iconic of Timberlake’s hits, «SexyBack» was tossed off early in his set (about the fourth song in). And there was no sign of anything remotely N’Sync entered into the evening’s festivities.

Timberlake clearly was interested in the here and now and that meant «Man of the Woods».

First of all, Timberlake incorporated a woodsy feel with faux trees and sawgrass on his immense stage. (The show was more of a runway that coursed across the entire floor, with fans standing around the runway in the open spaces behind). During the acoustic part of the set, a campfire even opened up on the B-stage at the back of the auditorium with his band, backup singers, and band gathered around it as if they were settled in a southern forest.

Timberlake was smart enough not to stack the evening entirely with new album tracks. (That tends to inspire too many beer-run or bathroom break moments.) But he also was conveying to the crowd… «I love those old songs, but I’m still alive and well, thank you very much».

And Timberlake truly still is an entertainment force to reckon with. In the old days, back in the era of black and white movie musicals, Timberlake would have been a song and dance man. And he truly is following in the traditions of Fred Astaire and Gene Kelly, someone who can sing with conviction and charm, and who can dance a dervish.

But, as noted, Timberlake is not interested in looking back to the past — even such masters as Kelly and Astaire. His performance and music is very much about the here and now.

Timberlake just never stopped moving (except for one video interlude… that probably gave him time to wipe off the sweat, gulp down some fluids, and gather a well-deserved breath).

Before Timberlake came out, the expansive stage made me think if it was necessary. Sometimes, these long runway stages that snake through the crowd are limited to one moment in the show. Most of the evening is spent on the traditional stage in the front of the auditorium. But Timberlake mostly left the main stage behind where his musicians, who could have the space to themselves. Meanwhile, he, his backup singers, and army of dancers staked out their territory on the catwalk.

For the audience, the move gave them all a chance to be in the good seats at one point or another during the show. And for Timberlake, it gave him more space to dance, dance, dance- to quote Timberlake’s own «Can’t Stop the Feeling».

By the by, «Can’t Stop the Feeling» was one of the highlights of the night. Its exuberance and joy epitomized the party atmosphere created by Timberlake throughout the show at the Sun.

«Cry Me A River» also drew me in as Timberlake tapped into the emotions of the song and his hypnotic performance.

Although those two songs come first to mind as highlights for the Man of the Woods Tour, the whole evening was a «Wow».