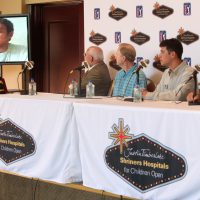 Tournament planned for next month at TPC Summerlin

But ‘pep rally’ may have served as a more appropriate title for the event, as no one associated with the tournament shied away from sharing their excitement.

«Every major city in this country has a PGA tournament», UNLV golf coach Dwaine Knight said. «And there’s no reason Las Vegas can’t. If they decide they want a great PGA tournament here, they will have it».

The tournament will run from Oct. 15 to 18 at TPC Summerlin. It will be the 27th consecutive year Las Vegas has hosted a PGA Tour event.

But organizers, including first-year Tournament Director Adam Sperling, say this year’s tournament is different. Sperling believes this year could be the first step in establishing the Las Vegas stop as a premiere event.

It’s the tournament’s second year in association with Justin Timberlake and Shriners Hospitals For Children.

«I hope we can get in the FedEx Cup», said Timberlake, appearing via web cam from New York City. «I’m still pretty vocal about that».

The event is part of the PGA Tour’s fall series, however, the top finishers will not earn points toward their ranking in the FedEx Cup.

In order for it to become part of the Cup, the open needs to attract high-caliber players. Sperling said he thought the tournament had achieved that this year.

«We’re shaping up to have a really strong field that we can all be proud of», Sperling said.

Last year’s champion, Marc Turnesa, will defend his title. Players have until Friday to register for the tournament so it’s plausible that a few more well top professionals could join.

Timberlake will once again be featured in the Pro-Am, which will be held the day before the tournament begins. Other celebrities slated for the Pro-Am include musicians Smokey Robinson and Kenny G, poker professional Phil Hellmuth and local LPGA player Natalie Gulbis.

Marc Turnesa was also at TPC Summerlin for the press conference.

After winning last season’s tournament, Turnesa has struggled in 2009. He has not finished higher than 30th in any tournament and is currently ranked 189th in the points standings.

Turnesa said his putting has been the problem. Perhaps, a tournament at the course he won his first major could be the cure.

«I’m excited to come back here», Turnesa said. «Obviously, this is a special place to me».

Tournament organizers had already said they were attempting to make the course tougher for this year’s event.

Now, they’re knocking it down to a par-71 from 72. The pin on the third green will be moved closer and the hole will be a par-4 instead of a par-5.

He made an exception to that rule recently when he had an opportunity to play with NBA legend Michael Jordan.

«That was probably one of the cooler experiences of my life because he was my childhood idol», Timberlake said. «Playing with Mike Jordan was pretty cool — and the rumors are true, he does like to gamble on the course».

Timberlake said he and Jordan played 27 holes. At the end, Timberlake was exhausted. Jordan was not.