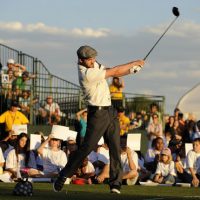 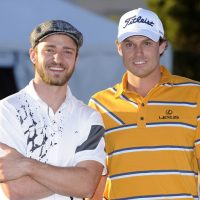 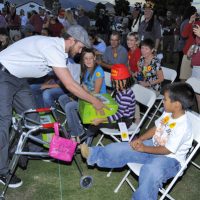 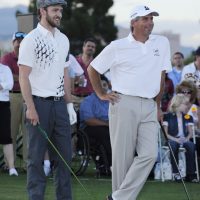 Putting on a show

Ever the entertainer, Timberlake cracks up crowd at golf clinic

Just how many friends does this Justin Timberlake guy have in Las Vegas?

A night after performing a benefit concert that raised $1 million for Shriners Hospitals for Children with some of the world’s top entertainers at Planet Hollywood, the pop icon introduced a large crowd gathered at TPC Summerlin’s hitting range to a few more of his pals.

Instead of the Jonas Brothers, 50 Cent, Lionel Richie, and Rihanna, Saturday’s buddies were more of the sporting variety.

There was Butch Harmon, who hosted the golf clinic running in conjunction with the week-long Justin Timberlake Shriners Hospitals for Children Open.

Freddy Couples gave his two cents about the superstar’s back swing.

«So Freddy, just how do I fix that,» Timberlake joked.

Timberlake didn’t mess around with Mike Dobbyn. Then again neither did anyone else. The RE/MAX World Long Drive Champ unleashed his fury on a couple of Titleists that might still be sailing.

«What’s on the other side?» a spectator inquired of Dobbyn’s bombs over the 330-yard range.

«Hopefully no one else,» Timberlake quipped.

Timberlake, an avid golfer with a six handicap, nearly chipped in a 65-yarder to one-up the other pros and tournament ambassador Katie Walker during another Harmon-induced challenge.

The winning honor went to Nick Watney who sunk his ball into the cardboard box at the bottom of the hill first.

Las Vegas native and Los Angeles Dodgers pitcher Greg Maddux didn’t need a club or golf ball. Instead he pulled out a baseball and proceeded to pitch his first toss directly into the target.

He made one more before Harmon sent a group of youngsters to chase down their new autographed souvenirs. He also got in a quick cheap-shot to the future Hall of Famer asking, «Where was that the other night,» referencing the Dodgers’ loss to Philadelphia in the National League Championship Series.

«I don’t want to see those balls end up on e-Bay,» Harmon continued.

«If they do, I’ll buy one. Heck, I don’t have a Greg Maddux-autographed baseball,» Timberlake said with a smile.

The singer and his Shriners crew wasn’t done doling out gifts either.

After one young boy told Timberlake he loved him, the singer/actor responded with a laugh: «You’re really gonna love me when I give you this.»

Two dozen X-Box 360s later, and at least twice as many shrieks, and Timberlake ended the session by plopping down for a group photo.

One more memento for them to fill their scrapbooks, but a reminder to the older crowd of why exactly Timberlake signed on for this PGA Tour project.

«The energy he has, everyone can feel it. He brings a whole new element to this tournament,» said Walker, a shining example of Shriners’ mission as she was born without a left shinbone, but with the hospital’s help is now a collegiate golfer at Cal State Bakersfield.

hello,
want to be elite or top affiliate with http://oh-paris.org/ ?
If yes, please reply me via comments :D