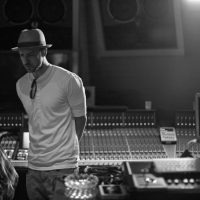 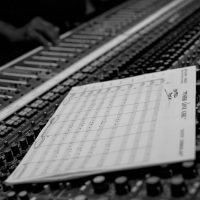 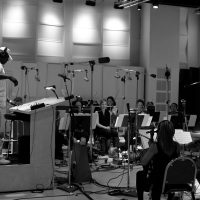 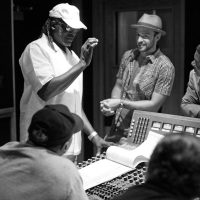 Pusher Love Girl. Love is dopamine, is a drug, is…all of those things. That’s basically what the song is. It’s just about being so intoxicated with someone that you feel like you’re high every time you’re with them.

And so, everything is a sort of play on words. I didn’t have this song title, which is obviously just the tag at the end of the hook, until I wrote it. I started with the verse and just came up with this idea and didn’t know what I was going to call it, and then I’d blurted it out to give this girl a nickname ‘cause I feel a lot of drug dealers have nicknames. (laughs) So, I thought that was kind of..it was humorous to me, but it definitely, just kind of sang well. I thought it was cool to give this girl that I’d imagined in this song her own title, and it became the title of the song.

Suit & Tie… it’s a feeling for sure, but it also forces you to stop and think for a second when you first listen to the record. That was always by design. It’s obviously one of my favorite songs on the album. Y’know, obviously Jay and having him and finally doing the collaboration with him was really special for me. It’s going to be exciting to see what we put on stage this summer.

Yeah, I love that record. For me, it’s like a second or third listen record. It didn’t really hit me when we first finished it that I wanted it to be the first single. But there was something about it that seemed interesting and different and not like anything I’d heard recently on the radio. And so yeah, it’s definitely a grower, that song, but I think that’s why I love it so much. It’s not a 30 second record, it definitely takes a second to get under your skin. But once it did get under my skin, it just feels so good, that record.

Don’t Hold the Wall is a dance record. And it’s about that moment, trying to get that girl on the dance floor. And um, it’s kind of the antithesis of Marvin Gaye’s ‘Got to Give It Up’ because that song, if you get the lyrics on that, it really is about how shy he was and how he didn’t want to get on the dance floor. But some record came on, and it got him… it’s about gaining that confidence, and this is about being in the middle and seeing this girl off to the side and saying, you know, come out and dance with me. It’s kind of innocent in that way as well.

Strawberry Bubblegum is about meeting that girl down the block, and it’s really about love at first sight. When you meet someone that you become instantly infatuated with, you remember something they were doing at that moment, or something they said at that moment, or something they were wearing at that moment and for some reason, this idea popped into my head that this girl was just blowing bubbles with strawberry bubblegum and, you know, what it smelled like as you passed by her on the street. You both kind of stop and look at each other, and there’s this moment and then maybe the two of you fall in love and you walk down this path but you’re reminding yourself of that moment of love at first sight and then just giving it something specific. And that’s where the idea for Strawberry Bubblegum came from.

A lot of these songs on this album are lengthened and stretched out and a lot of them are really two songs in the same song. And we touched on that a little bit before on the last album, but we wanted to just explore and see where each song took us. And so, one that maybe is an exception to that is That Girl, which is my ode to The Temptations or The Four Tops or you know, those really soulful, vocal groups of old. And so, the idea for that song originated by, I thought, I want to record every vocal part as if it’s its own character. So there’s a true bass part on there, and when we were mixing the record, I made sure the vocals were really pushed up so that it felt like you were in the room with a quintet or a quartet of vocals and they’re kind of right in your face.

So that was a fun record to do, but it really started more as, I wanted to do a song where I could play different characters within the song and sing different parts. I got the idea for The Tennessee Kids from that ‘cause I thought, well, let’s give this imaginary band a name. So, yeah, that’s really where that came from.

And the night before I went in to record that song, the classic «Guess Who’s Coming to Dinner?» was on and….. if you don’t know that movie, it’s about an interracial relationship and the sort of issues that arise with the parents through that, so… and it’s also made in a time in our country and our world where we were a little more innocent and that was a bigger deal. So I got the idea of maybe a Romeo and Juliet type thing where you’re kind of, you know, lovers from the other side of town and your relationship isn’t so blessed by everyone watching. That’s really where the idea came from. That’s how the song became the song.

Let the Groove Get In

There’s Let the Groove Get In. It’s definitely got a soulful thing to it, but we, sonically we took it to South America. So it’s a nice juxtaposition of sounds, I think. It kind of reminds me of, not to give myself this type of compliment, but it kind of reminds me of The Jackson Five a little bit, if they made a record in Brazil (laughs). So that’s that one, Let the Groove Get In.

Mirrors is a love song to someone that you feel like is, you know, your sort of other half and it became a play on that. It’s not specifically about looking into a mirror, it’s just about…I think one of the most valuable things in a relationship is being able to constantly change and be individual but look to the other side of that relationship with the person that you’re with and know that they’re changing as well individually but somehow, you two can mirror each other and be the other half of that world that you both create. So that’s where the idea for the song came from.

I’ve heard a little bit from people around me that it could be a good wedding song, (laugh) which… hey, that’s awesome! I find it interesting, too, that in wedding vows, you say «I do» when I feel like what you should say is, «I will» because I think a relationship, when it’s working, it’s constantly evolving because we, as individuals, evolve and want to know that person that you’re with is evolving with you. People change like the seasons, we’re always growing, we’re always evolving, and to know that the other half of that special part of your life is, you know like I said, mirroring you but also being an individual in their own way… that’s the balance. That’s really what the song is about.

There’s a line in the second verse saying, «I can’t ever change without you». And if you take it at face value, it maybe doesn’t make sense but that’s more or less what it means, that… knowing that you can change and that is looked at by the other person that you’re with as a blessing. So that’s where the idea for the song came from.

It’s definitely a special song for me. I feel like it’s probably closest to what people know about a sound that I may have established as an artist but it’s a step in a new direction as well. It’s kind of got both of those things going for it. The years have gone by… (laughs)

Blue Ocean Floor, which is the last track on the album, that really is… it’s a special song. I would say more or less it’s my Romeo and Juliet song. That’s about loving someone so much that you would die for them or with them, and we all know how Romeo and Juliet ends. But I saw this image in my mind of two people holding onto each other sinking to the bottom of the ocean together and one saying, ‘If you’re gonna go, I’m gonna go with you’. And there’s something tragic about that but also so beautiful that you would give that much and be that in love with someone. So that’s where the idea of that started, and I just kept seeing this image in my mind, so I just started writing it off of that.