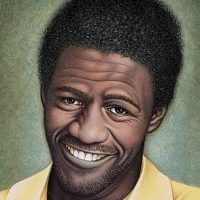 Al Green has helped overpopulate the world. He’s got some serious babymaking music. But what makes him such an inspiration is the raw passion, the sincerity and the joy he brings to his music. People are born to do certain things, and Al was born to make us smile. You hear his voice and it lights everything up. Every time one of his songs starts playing — whether it’s «You Ought to Be With Me», «I’m Still in Love With You», «Love and Happiness» or, of course, «Let’s Stay Together» — when the stomp starts and the guitar comes in, you know you’re in for something full of sweet love. His songs weren’t as political as Marvin Gaye and Donny Hathaway. But if those guys were speaking to you, Al Green was speaking for you.

Al Green’s voice will always remind me of driving the back roads of Memphis with my parents, listening to cassette tapes. Hearing Al as a kid made me want to become a singer and showed me that it was OK to have a softer, more falsetto voice. I really related to that, because I never had a big, boisterous, American Idol showstopping voice. Al, he was a crooner. The way he would squeeze out a note can’t be trained and can’t be imitated.

Behind him was this incredible band. On songs like «Tired of Being Alone», the horns are tasteful and restrained but completely funky. I always loved the way the mistakes were kept in on his albums, like the way the band is almost out of sync at the beginning of «Love and Happiness». Even his messes are beautiful.

Eventually I found out this man I idolized lived five minutes from me in my hometown. Then, years later, I went to the White House (back when Clinton was in office), and Al was there performing. He sang Sam Cooke’s «A Change Is Gonna Come», and the audience wept. After I released my first solo album, I was doing a TV special in Memphis, and I called him and asked if he’d grace us with his presence. We sang «Let’s Stay Together» on that stage, and it was a milestone in my short, unimportant career. I learned something incredible: Everything always has to be about the show. But Al Green is the show, and when you watch him perform, you see something honest and soulful and amazing.