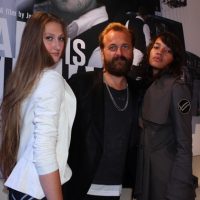 Tonight the label William Rast is celebrating the launch of its first international campaign and presence at Berlin Fashion Week. What are your expectations?
This image-campaign is very important. Before I felt like I needed the lifestyle package for William Rast. My wife Marcella had the idea of a film in which Justin should not play Justin but the figure of William Rast. The film made by Jonas Akerlund shows Justin as a cool and rebellious guy, William Rast, accompanied by model Erin Wasson playing his fearless girlfriend. The movie links Justin himself and the label by telling a story and giving an identity to William Rast.

You and your wife started as creative directors with William Rast last year. Fall 2008 will be the first delivery. What’s so fascinating about William Rast for you?
Last summer in July I got a call from Reinhard Haase, the German importer of William Rast. At first I wasn’t interested as I didn’t want to do a celebrity brand. But Justin wanted to meet me; he is a great fan of J. Lindeberg. So in September I met Justin’s partner Trace Alaya in San Diego. I saw his great passion in doing William Rast. That was also my attitude in doing design, for what you need is passion. That’s when I decided to start with William Rast.

How have you defined the look of William Rast’s fashion line?
Back in our consulting office in New York we did a lot of research and a lot of storyboards. The collaboration between Justin, Alya and us was very close to develop the right look of the fashion line. As Justin is very proud of his origins in Tennessee and also a Hollywood star, we had the vision to create something that combines both the modernity and coolness of Hollywood and the rough roots of Tennessee. William Rast is a cross culture linking glamour influences and the spirit of Justin’s roots.

How would you describe look and feel of William Rast?
William Rast has a strong language and a special touch. It shows an urban look with a very body-conscious and tough attitude, but with a tailored twist. My wife Marcella does the womenswear, I do the men’s part. Both segments are strictly separated. Justin himself is also involved in design. He gives us inspirations and ideas we have to interpret. While working with William Rast our relationship with Justin has grown deeply. We are good friends. I’m not only the designer of the label but also Justin’s stylist now.