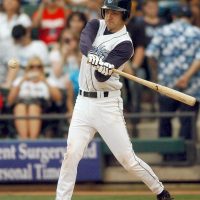 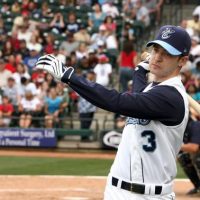 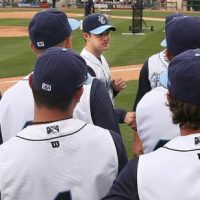 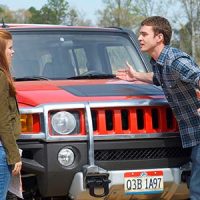 «What’s going on? We thank you. Like Michael said, we thank you for hanging out. And it’s cool for you cause you get to be in a MOVIE! Um, don’t expect anything grand from me, this is not my stage. But, after this, you know like Michael said we appreciate you guys hanging out. We want to keep it professional. And we’ll just get the job done. So, thank you again O.K.?»

Justin Timberlake hit a ground ball to first base, and the opposing team’s right fielder hung back and feigned catching a fly ball.

It was part of director Michael Meredith’s instructions as the Corpus Christi Hooks, the Round Rock Express and thousands of fans helped cap filming Sunday on the independent movie «The Open Road». Fans were treated to more than an hour and a half of filming and a once-in-a-lifetime view of Timberlake at the plate.

On the sixth take, Timberlake got it right — finally hitting a fly ball to right field, surpassing even his own expectations.

«Don’t expect anything grand from me», the six-time Grammy winner told the crowd before his at-bats. «This is not my stage».

The Hooks team watched from the dugout, and first-year manager Luis Pujols stood in the third-base coaching box. He chuckled when asked about Timberlake’s swing.

Timberlake’s girlfriend, actress Jessica Biel, stood near the dugout for some of the shoot but went back to the Hooks’ clubhouse after about half an hour, waving at fans as she walked by. Two bodyguards stood watch over Biel and Timberlake.

In «The Open Road», Timberlake portrays fictional Hooks player Carlton Garrett. Sunday was the final day of shooting with the cast, though the crew will get a few more shots in Ohio without the stars.

«I just hope that he’s right at home plate so we can scream our hearts out», Samadi added.

She got her wish. Meredith and producer Jordan Foley closely guarded the film’s plot, but said the scene filmed Sunday would be the movie’s opener. Garrett was to foul out, ending the game.

The film will be released in a year to 18 months, Foley said.

Meredith said he chose the Corpus Christi Hooks partly because he loves Nolan Ryan, the team’s part-owner, and because the Harbor Bridge provided the perfect setting over Whataburger Field.

«The stadium was so beautiful, and the bridge there, it looked like the road was calling the lead character», Meredith said.

A helicopter, which circled the stadium before and during the game, came over the bridge to take wide crowd shots for three takes after the game. Fans were on their feet, cheering «Let’s Go Hooks!» then acted dejected after Timberlake’s fly ball was caught, making him the last out of the game.

During every take, Timberlake stopped after rounding first base, took off his batting helmet and walked slowly back toward the dugout.

«I’ve been a big fan of Justin’s music», Brianne Walker said. «I asked (Sean) if he could get a picture or autograph or something. He surprised me with a signed ball».

Actor and pop star Justin Timberlake, dressed in a Corpus Christi Hooks uniform, warms up before shooting a scene for ‘The Open Road’ on Sunday at Whataburger Field. The filming took place before and after a Hooks exhibition game.

Actor Justin Timberlake shakes hands with Hooks players before filming a scene for ‘The Open Road’ on Sunday at Whataburger Field.